A long time ago, when I was a beginning PhD student, I noticed that a professor from a rival faculty had taken my first published journal article, and released it pretty much word by word under his name as course material. Shaken, I sought advice from my department head, a chain-smoking old grump who had been well known for his strictness and foul mouth, and somewhat less so for his golden heart. He listened to my woes, and gave me three pieces of advice:


He was right, and I have lived by that wisdom ever since. But that doesn’t mean I don’t notice.

The question of imitation can be tricky in something like old-school gaming. The systems and supplements we use are often homages, and ideas get around, as they do in creative communities. It is not surprising to discover a module based on Keep on the Borderlands (although there have been surprisingly few genuinely good ones) or The Tomb of Horrors (although it is a module whose lessons are far less universal than people think). People can also take ideas and build something interesting upon them, or develop the subject of a forum conversation into something more substantial. Or run an adventure and decide they can do it even better. Fine and good – this is how a lot of refinement and incremental innovation happens. But it is only right in this situation to give credit for the original idea, and if possible, notify the idea’s originator. It is not a matter of life and death – but it is a matter of basic courtesy. And the opposite seems to be happening ­ with surprising regularity these days.

I am not talking about the time some psycho from Hungary stole a very early (2003) prototype of The Barbarian King, and published a shoddy 5e conversion on the DM’s Guild under his own name. That guy is just cuckoo insane. Nor am I talking about the people just republishing free material for a few bucks (as I hear, this has happened to Kellri’s netbooks on several occasions), and I am sure as hell not talking about outright dirtbags like James L. Shipman. Those are clear cases of theft. No, I am talking about small things I have been noticing. Thus…

Exhibit 1: The Great Wheel Gets Even Greater

Actually, this one doesn't stop here, because it turns out Velour Palace of the Disco Emperor has already been the subject of a heated IP battle, with the module's author trashing a larcenous upstart. No kidding. 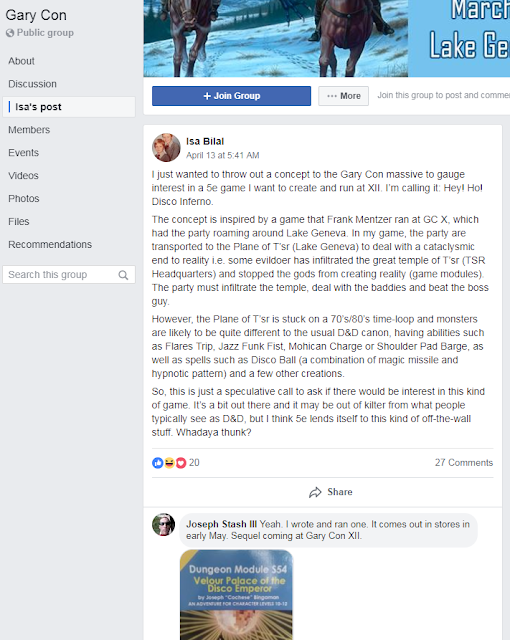 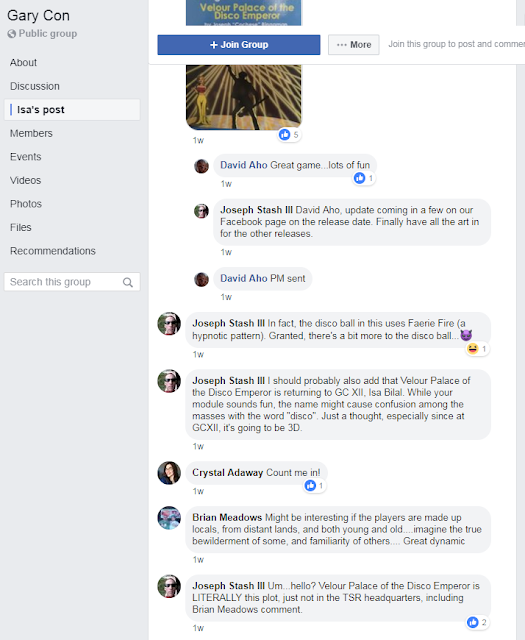 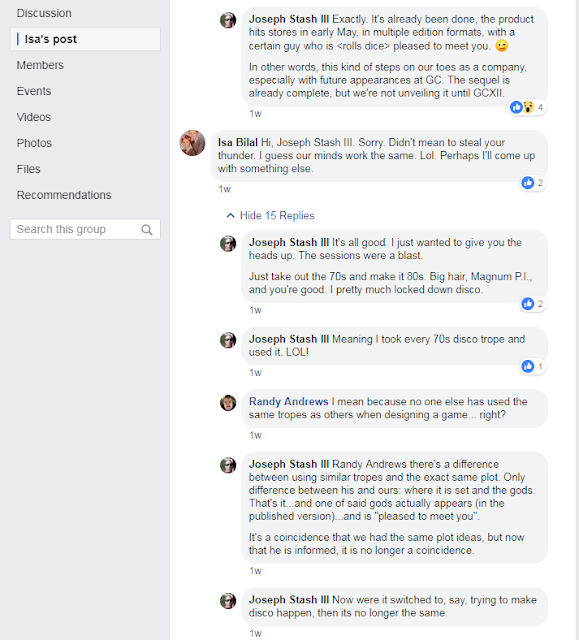 Now that he is informed, it is no longer a coincidence. Well, well, WELL!
The things you learn on the Internet.

There is also this thing:

Language gap aside, you will note that Velour Palace of the Disco Emperor's first convention appearance was 24 November 2018. Except it was a different convention, a different Disco Emperor module (obviously), and a different designer - my good friend Premier, the only one who had, in fact, asked me if he could run with the idea. (Of course he could.) All testers and con players had agreed it was a great adventure. I have even been reminding Mr. Premier that he might want to publish it, and there might even be an interested publisher (presumably not J. Halk Games).

So here our story ends.

But wait! This just in! Turns out Luke Gygax himself also wants in on the Disco Emperor dollars!

I am honoured to, ah, inspire none else but Melf the Elf. That, Ladies and Gentlemen, is what I call "an OSR Thief class"!

So that's how things work in the murkier corners of our cottage industry. What am I going to do about it? Well... Largely nothing. I will surely be flattered a bit. Inspiring people is reassuring you are doing something right.

But I will also sure as hell try to stay two steps ahead.

Email ThisBlogThis!Share to TwitterShare to FacebookShare to Pinterest
Labels: the pillory