First, news on Helvéczia’s progress! Production is well underway, and boxes on our checklist are ticked off one by one. It is a complicated list, but there is a point with a large “ENDE” sign, and that sign is approaching. Here is where we are:

With all things considered, it looks like the first boxes may be assembled in the second half of May. They will not go on sale immediately. The box would be available NOW if it was in my hands, but this kind of work does take time – the increase of product complexity is not linear, but geometric. As the plan goes, I will take a short holiday in late May and early June (during which time the store will be closed), after which Helvéczia will be available. If everything comes together, a small initial batch will be sent to NTRPGCon, and the game will make its international debut there – check the Black Blade Publishing stand!

For this post, let’s delve into the game’s character creation rules – I shall make a random character to demonstrate how the rules work, and how they are balanced between the familiar and the unknown.

Unless otherwise specified by some special circumstance, all Helvéczia player characters are randomly generated, and at the second level of experience. Since the game encompasses six experience levels, power differences are rarely bad enough to merit starting above second level. Enterprising NPCs can be promoted to adventurers during play (Little Juan, whose adventures we have recounted before, started his career as a servant, and rose to fame and fortune after his master, Don José Emilio de Gálvez y Rivera, had to depart with speed from the inquisitors who had wanted to burn him for practicing black magic).

For our character, we shall generate ability scores with the 4d6, drop lowest method. The scores are always in order, but the player can select between two sets – this results in generally competent characters, but often with a few interesting flaws. We roll the dice, and get...

Neither of these mostly similar sets make for flattering cads, but both are essentially qualified for any class in the game: there is no overwhelming reason not to run a strong Vagabond, or even Student (who are not as frail as D&D’s magic-users), and Father Taddeo Previti, the renowned inquisitor, had a Dexterity of 18, with an almost supernatural ability to silently appear behind someone’s back (“Nobody expects the Italian Inquisition… in Catalonia!”). For now, we will pick the second set, note down the ability score bonuses on the character sheet (more on this later), and create a fighting-oriented character.

Our character, Pascual de Perales (name generated with this very useful random generator) shall be a Spaniard – somewhere midway between safe bets like Frenchmen and Germans, and wildcards with like Poles and Hungarians (who come with higher benefits, but severe drawbacks). The Catalonia campaign introduced several varieties of smaller groups on the Iberian Peninsula, from Andalusians to Basques and Gallegos, but for now, we shall stick with the rulebook. Accordingly, we can note down the following special abilities:

Helvéczia’s Fighter class is divided into six sub-classes, and – in keeping with the swashbuckling theme – we shall make Pascual, who seems like a bravo or troublemaker with his high abilities but below-average Charisma, a Duellist. This means the following:

We note down this information on the character sheet as well. Pascual currently has 2000 experience points (for 2nd level), and needs to hit 6000 for 3rd level. 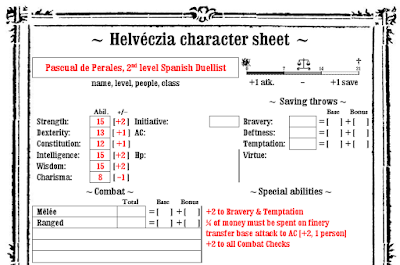 As one of its points where it departs the furthest from common “OSR” systems, Helvéczia has a simple skill system. Pascual de Perales has three skills by default, and plus two for his Intelligence bonus. Since Fighters are more versatile than other classes, he will receive one more each on 3rd and 5th level. We pick the following skills, beneficial to a troublemaker:

All of these skills are rated at a value equal to the sum of the character’s level [2] and the relevant ability bonus [-3 to +3]. In his youth, Pascual must have had some formal education, as he has a science skill... which, for added fun, we shall roll randomly from a table with a d6 and d12 (there is a similar one for crafts): a 2 and 1, making Pascual trained in the useful art of Aesthetics! Note that Pascual shall not be restricted to the use of the selected skills: he can use any skill available to his class (which is “most of them”), he just does not get to add his level to those rolls. Helvéczia characters are jacks of all trades… granted, on low levels, they are also masters of none! Difficulty Classes (DCs) for most rolls are 12 (for Normal tasks) or 18 (for Hard ones).

After these steps, we can determine Pascual’s secondary values, various stats derived from class, ability scores, and a few other factors. 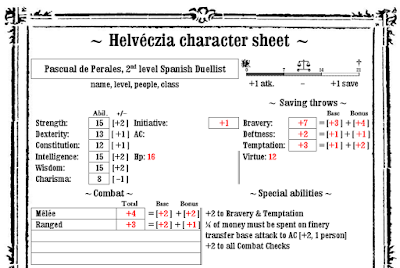 We’ve got Pascual, now it is time to give him equipment. At the beginning, he has a set of inexpensive clothes, and 2d6 golden Thalers or equipment to the same value. As a Duellist, he is also entitled to one weapon of his choice. We roll 3+4=7! There are options to take out a starting loan at a sympathetic banking house like the Fuggers, Die Gebrüder Lehmann, Rotschild & Söhne, or Goldmann-Sachs, for those who enjoy paying compound interest on relatively short notice, but this will be enough to get by. We will convert our Thalers to 70 Pfennigs for ease of use, and start shopping.

The reader might note an “X” in the second column. This is for encumbrance values: characters can carry one object (or a logical combination of small ones) in one slot, and depending on Strength, some may be crossed off – Pascual can carry 15 items on his person, but Szymon Czarniecki, a much weaker Student with a Strength of 7 (-1) would only be able to carry 12. 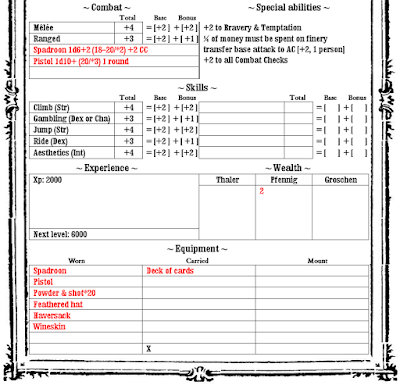 All that remains are background details. In Helvéczia, it is recommended to give your character a brief and to the point backstory – perhaps a paragraph to establish the hero or heroine – and let the rest emerge over play. It never hurts to have that persona (Pascual is a violent and charmless bravo, but more smart than one might assume), along with a sampler of past sins or good deeds. Since Pascual’s Virtue is average, he might not have done anything bad, or he could have just been a person of extremes – which is what we will go with:

Character notes:
"There is no greater teacher than Life; and this was the wisdom Pascual de Perales followed when ending his studies and embarking on a life of swordfighting, highway robbery, and daring escapes from places where the previous two had proved unsuccessful. After a misadventure with the stagecoach of a great hidalgo named Don Alejandro Luís de Santillan, he thought it better to leave his native land, and head for the lands of Helvéczia, where the Law shall rarely follow."

The Catalogue of Sins:

–1 point: Plundering the Inn of the Barbican
–2 points: attack on the stagecoach, and killing the bodyguard
+2 point: defending the peddler from the guards
–1 point: robbery at gunpoint

Pascual is now ready for his first adventure!

In my experience, explaining character generation for Helvéczia takes longer than actually doing it, especially after the first PC or two (initial character turnover can be rapid). Of course, the process above only applies to player characters. If he was a throwaway NPC, here is how the Gamemaster would stat him:

You will note that the translation is not entirely accurate – some things are simplified or omitted – but the Gamemaster, who has to move several characters in the game, shall surely appreciate the simplicity!

Email ThisBlogThis!Share to TwitterShare to FacebookShare to Pinterest
Labels: helveczia