I am pleased to announce the publication of the tenth issue of my fanzine, Echoes From Fomalhaut. This is a 52-page zine dedicated to adventures and GM-friendly campaign materials for Advanced old-school rules, with cover art by Cameron Hawkey, and illustrations by Vincentas Saladis, Graphite Prime, and Sean Stone.

Whew! This is the 10th anniversary issue, and it is still hard to believe this project has gotten this far – you gain a newfound appreciation for Lee Gold and people like her, who have been at it since the dawn of time. How do they do it? In any case, two pages of this issue are dedicated to tooting my horn with a catalogue of the zine’s articles (you can download this below).

From the declining empire of Kassadia, the zine presents The Temple of Polyphema, a dungeon adventure for levels 2–4. The shrine of the cyclopean goddess has been defiled by a band of marauding gnolls, while her followers, the pitiful goat-heads, are in deep trouble due to an old curse, and the gnolls’ ravenous appetite. This adventure, with 25 keyed areas, was originally written for an adventure collection that never happened (and the same one which had produced From Beneath the Glacier), and is presented here for your enjoyment.

In the Twelve Kingdoms, we enter the tiny kingdom of Caer Iselond, ruled by Thrisp Urlum, the Beggar King. Fallen on hard times and past his prime, the king nevertheless keeps a large court with a merry knightly order recruited from rogues and never-do-wells… Now, external dangers and intrigue within his halls cast a shadow on Caer Iselond... and only the Guests of the Beggar King can set things right! This article describes the castle, its people, and the mysterious passages that lie sealed beneath the bustling halls (24 keyed areas).
Near Caer Iselond lies the druid-haunted Vexwood, where these followers of nature have been known to burn sacrificial victims in an enormous wicker raven. Even here, one recluse stands out with his menacing eccentricity – and his domain is the Gorge of the Unmortal Hermit! 13 keyed areas are described in this wilderness scenario. Can the Hermit be defeated if he is truly unmortal? And what about the crystal eyes he is reputedly collecting? Only one way to find out (levels 2–5).
From the City of Vultures, two organisations are described with their peculiarities, leadership, goals, and noted locations. Oom the Many is the name of a great sorcerer who is legion – and death does not seem to have touched him. What lies beyond the grey-robed visage, and what is to be found in the House of Oom (14 keyed areas, level-independent)?
Unlike the secretive Oom, all know the name of Jeng, and most shudder when it is spoken: the harsh and secretive religion rules over the City of Vultures with its extensive spy network and army of fanatical nomads. Yet Jeng’s clergy hides many secrets, and both treasures and valuable knowledge are to be found in… The Temple of Jeng! (38 keyed areas, this one if for levels 5–9, and can be nasty even that way). This issue’s fold-out map displays the temple, Oom’s house, and more sites with The Tomb of Ali Shulwar (Echoes #07). Is everything connected? It seems so.
The print version of the fanzine is available from my Bigcartel store; the PDF edition will be published through DriveThruRPG with a few months’ delay. As always, customers who buy the print edition will receive the PDF version free of charge.

The Illustrious Index of Incline - Catalogue of Zine Articles (PDF)

Email ThisBlogThis!Share to TwitterShare to FacebookShare to Pinterest
Labels: zine

[BEYONDE] Expedition to the Dungeons of Torda

Play report from the Dungeons of Torda, one of the more famous delves of Transylvania. Three levels, high verticality, questionable “non liner” elements. This will be picture heavy, so the rest beyond the intro will be hidden behind a <more> tag.

Torda (Romanian: Turda, German: Thorenburg) is a former salt mining town in the middle of Transylvania. Salt is wealth, salt is power; thus, the mines have been extremely important since the Romans, and became a significant source of wealth in mediaeval Hungary. The town was important enough to control all salt mining throughout Transylvania, becoming the seat of the Salt Chamber (later Salt Office), and hosting multiple national and regional diets. Here, in 1568, freedom of religion was declared for the first time in Europe, establishing the ground for the mostly peaceful co-existence of Roman Catholic, Lutheran, Calvinist, and Anti-Trinitarian (Unitarian) faiths, whose effects would indirectly also apply to Eastern Orthodoxy and Judaism. (The edict, while long-lasting, was neither perfect nor unlimited: Anabaptist refugees were welcomed with open arms, but the Székely Sabbatarians, who took religious innovation to the extent of converting to a form of Judaism, would face persecution, and remained an underground faith – their last remaining stronghold, Bözödújfalu, now lies in ruin beneath a water reservoir). But let's get back to the main adventure site. 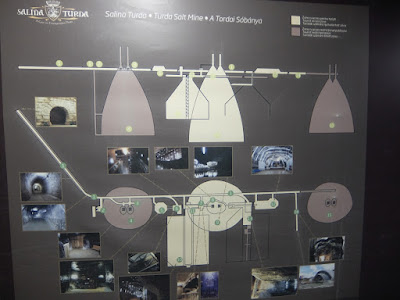 Currently, the mines show a form representative of the late 19th and early 20th century, before extraction finally ceased in 1932. The main shaft, a few side-chambers, and two of the great conical mining chambers can be visited. This makes for a surprisingly easily delineated three-level structure: an Entrance Level (the Franz Joseph passage), a Mine Level (the Rudolf Mine), and a Subterranean Lake Level (the Therezia Mine). Two secret levels, "Anton" and "Joseph" are not open for ordinary explorers. There are not one, but two dungeon entrances, one from the village, and one from the hilltop above. The vertical dimension is enormous (the mines were worked from the top down), although the horizontal elements are sadly kind of an afterthought – properly jacquaysed it is not.

Let us begin our descent…